Faith is easy…end of blog post.  I mean, just have some faith and life will be peaches.  Pull out that faith, sprinkle it like fairy dust and you won’t have a care in the world.  Right?

I remember in high school we used to go on student council retreats to a camp with one of those ropes courses.  You know, the ones that are high up in the trees, require a harness and helmet and for your parents to sign a release stating they’re ok if you come home with 50 broken bones?  I loved everything about those trips, except actually participating in the “team building” because:

At one point, each of us had to take turns climbing onto a platform that (in reality) was probably 6 feet off the ground.  In my memory, however, it was closer to 60 feet.  We had to turn with our backs facing the rest of the group, cross our arms and fall back.  Then pray that the other 20 kids liked you enough to catch you.  If your new boyfriend’s ex-girlfriend was down there, forget it.  Your chances were slim.

So why is it so difficult to close our eyes and just fall backwards?  Well, in high school, the answer is obvious.  There are 20 hormonal, sleep deprived maniacs (I mean, teenagers) responsible for catching you. Hard pass – no thank you.

Truth is, for many of us letting go and taking that proverbial fall into the unknown is more frightening than falling 600 (ok, ok…6) feet into the arms of your classmates.  These are some of the thoughts that often cross my mind when I’m in a situation that requires faith in someone else:

People let us down.  Friends bail when we need them, spouses forget anniversaries and co-workers will take credit for something you did.  It’s easier to just do all the things yourself – then no one is disappointed. No one meaning YOU.  And life can go on this way until God throws you a curve ball and you are literally left with no other option; all you have left is faith.

But faith is easy, right?  We already established that at the beginning.  Just turn on that ‘ol Faith Switch and watch the miracles happen.  Ohhhhh….you don’t have one of those?  Try Amazon Prime. 😉

Faith is one of those words we throw around a whole bunch on Facebook and Instagram.  Another favorite is “blessed”.  It sounds pretty and makes for cute Pinterest quotes [see below] and #momlife t-shirts, but rarely has any sort of real substance behind it.

Faith isn’t a wish. Faith is standing up in front of the enemy and refusing to let it overtake you. Faith doesn’t mean you’re going to have the outcome you want. It’s accepting that Christ has a plan for everything. Notice that I didn’t say “reason”.  I said he had a PLAN. Most of the time it’s impossible to see that plan through our grief.  What could be good or “planned” about watching your child fight cancer? Not a whole lot by worldly standards. The answer may not be something we understand until we have the chance to ask the Heavenly Father ourselves.

One of the first times I was truly smacked in the face by God’s awesome ability to wrap us in his arms was one afternoon in the ICU.

Layla was doing great after surgery and we were moved out of the ICU sooner than we expected.  The next morning the neurologist came in and said that they were turning off her EVD.  This was an external drain that allowed the pressure in her brain to regulate due to the excess fluid her tumor created.  One more sign that she was doing well, right?  About 12 hours later, I had this pending sense of doom wash over me.  Layla was lethargic and not very responsive.  I kept trying to tell the PA that something was about to happen, but I’m pretty sure he thought I was crazy.  Within 15 minutes Layla’s oxygen levels tanked and her blood pressure was dangerously low.  Once she was stabilized we moved back to the ICU for closer observation.

Turns out her brain was not regulating the fluid they way it should and we needed to reopen the drain.  The plan was to try again and this time slowly raise the pressure over several days instead of all at once.  If that didn’t work, we would have to put in a permanent shunt.  I’ll be honest, that scared the begeezes out of me.  What would that look like?  How would it impact her ability to do kid stuff?  What happens as she grows?

All of these questions I worried over for hours.  The next day, while our nurse was at lunch, the nurse from the room next door poked his head in to check on us.  He saw Layla had an EVD and asked what happened to her?  We explained she had a tumor removed and her body wasn’t adjusting well on its own.  He said “Oh, I have a permanent one of those”  What?!?!  😯😯 He went on to tell us that he was “born awesome” and had always needed one.  I broke down in tears and felt such a weight lifted.  God sent that man into our room to show us that everything would be ok.  No matter what happened, God had a plan.

It did take longer than we hoped, but eventually Layla’s little brain kicked into gear and the drain was removed successfully.

It was in that moment with the nurse that I knew I had a choice to make.  I could let the worry and sorrow bury me (and it will try to bury you, I promise) or I could take every moment and ask “Ok God.  What’s the plan here??”  I promise he’ll answer if you allow yourself to listen and fall back into his arms.  He will always be there to catch you.  You don’t have to wear that terrible harness either 😉 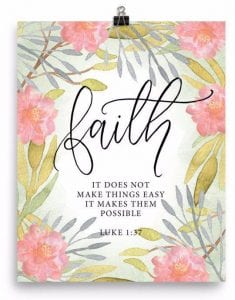